The Importance of Forming Habits  – and how to do it!  By Rebecca Simpson

Admit it, the first week of January that was jam-packed with gym sessions, healthy food, journaling and going to bed at 10:30 is a distant memory come February time, as the gym shoes begin to gather dust and the late-night Netflix binges creep back in.

The truth is, forming habits is hard! Habits are not something you can change overnight, or see the results straight away. They take time to form and develop, and it’s a gradual process to see the results.

Forming good habits is a fantastic way for us to challenge our minds, push our boundaries and create a better lifestyle for ourselves. It may seem like a daunting task to tackle, so here are some tips on how to form habits that will last. 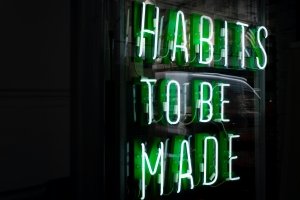 Having a goal or a reason why to form a habit is key in being able to form habits long term. If there is no reason behind why you are choosing to do a particular action or behaviour, it is easier to make excuses and you may find yourself giving up.

If you want to form the habit saving money, it is far more likely you will stick to this habit if you are actually saving for something, such as a holiday to Italy for £600. By having this solid goal, you know exactly what you are saving towards and how close you are to achieving your goal.

Habits can take a long time to form, and by having a big goal with no logical way to get there can seem overwhelming. Often, when we find something overwhelming, we creep back to our old ways.

For someone who has never exercised before, going for a 5k run 3 days a week is a daunting goal. This will make it difficult to work into your routine as it is so far from your normal day-to-day living.

By having a detailed and precise plan, that moves on in gentle stages, this at first daunting task will seem far more manageable. The habit will be much easier to form by making small changes to your daily routine, as it is not too drastically different from what you were already doing.

When babies try to take their first steps, they fall over countless times. But they get up, and try again. Now as adults, having repeated the process of walking every day, we do not have to think about it anymore.

Tie them into existing habits!

By doing a new habit straight after a habit we have already formed, we begin to make an association between the two.

Motivation comes and goes, but routines remain. By building a habit into your routine rather than just relying on motivation to do it, will help you form long lasting habits.

It has been scientifically proven that many of the habits we have, we do because there is some kind of reward or positive feeling that occurs after it.

In order to form new habits successfully, it is key that you reward yourself. If you feel good after doing something, you are likely to do it again!

Give yourself credit for performing the habits through positive self-talk. Something as simple as congratulating yourself can be enough of a reward; ‘Good work, Justin!’ You can also give yourself physical treats, such as a cube of chocolate after each time you write a journal entry, or even ticking something off a habit list can feel very satisfying.

Forming habits is hard work, so make it as easy for yourself as possible! Cut out the time frame that may lead you to overthink and doubt your decision.

If you want to go for a run in the morning, leave your running clothes out by the side of the bed and put them on as soon as you wake up, or even go to sleep wearing them. It a lot harder to convince yourself not to exercise when you are already in the gear.

If you want to form a new habit, such as going to the gym 3 times a week, find someone else who also wants to do this. You can motivate each other to do the action, and you are more likely to stick to it if you know someone else is doing it with you.

It is a lot harder to let someone else down than yourself, so on those mornings when you cannot be bothered to go to the gym, your brain will think of the other person, and this will force you to go, even if you don’t want to.

Many people, when they decide to form habits, will tell themselves they will start tomorrow. Or at the start of the next week. or at the new year. The truth is, on any day, at any time, you have the chance to form a new habit.

Whatever day or time you choose to start a habit will be difficult. The key thing is, it will get easier with time. And if you start now, rather than next week, you will be a week closer to achieving your goal.

It is never too late to break an old habit, and never too early to start a new one. So, don’t wait to form it, start doing it now!

About the Author: Kevin